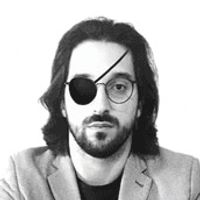 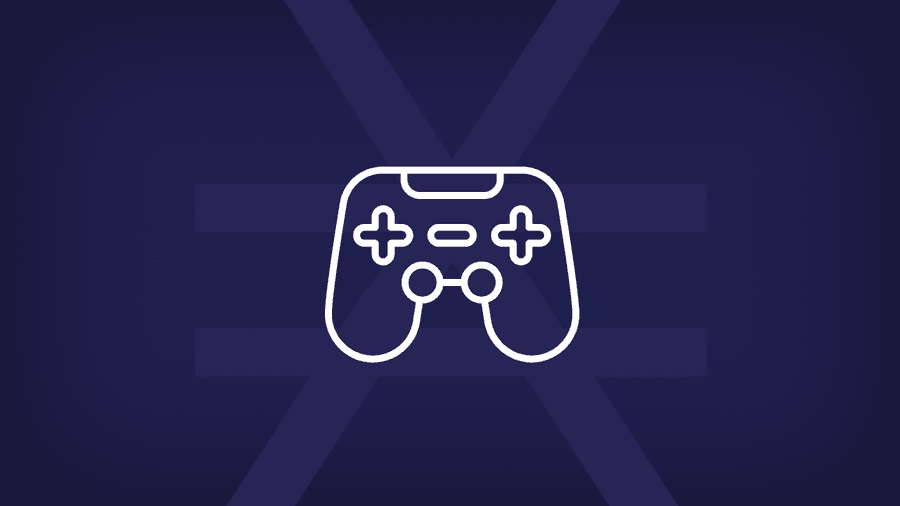 This article is written by a community contributor and does not represent the views of the Nano Foundation.

When it comes to pushing boundaries and embracing innovation, the games industry has few equals. From Sonic the Hedgehog to Solid Snake, Mario to Master Chief, computer games have been offering entertainment and inspiration for decades.

Now games developers are using nano’s technology in some incredibly exciting ways - none more so than the creators of Kakele Online, a multi-platform MMORPG that uses nano as its in-game currency.

In January 2022, u/bruno-kakele introduced the game Kakele Online to the nano community (r/nanocurrency). Bruno, co-founder of ViVa Games, said he was looking for a “real world currency, available in any country, that players [can use to] make some money if they choose to”. 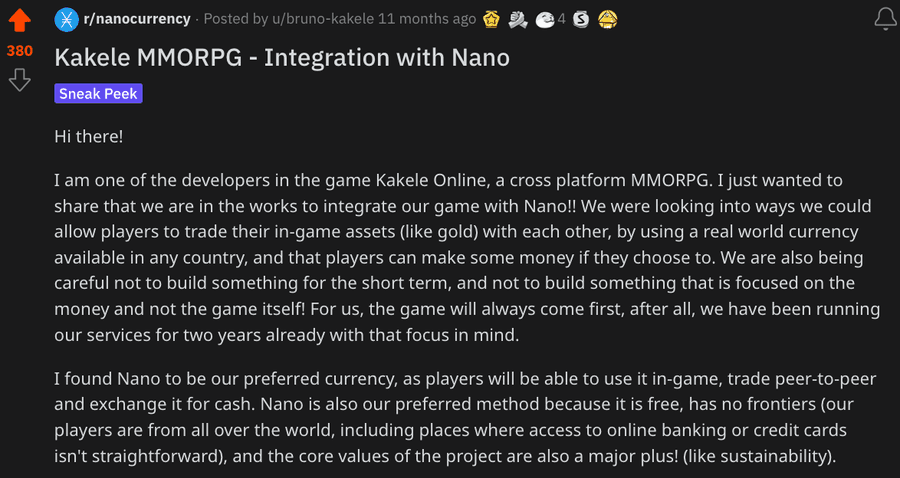 Players had to be able to “use it in-game, trade peer-to-peer and exchange it for cash”. For Bruno, that currency could only be nano:

“Nano is our preferred method because it is free, has no frontiers [borders], and the core values of the project are also a major plus (like sustainability)”.

Three months after its presentation, on March 25, 2022, Kakele Online launched the test server with the initial implementation of nano. On April 2, patch 4.1 was officially opened to the public, with an initial investment of US $4,000 in XNO distributed among four MMORPG servers – so that players could exchange the in-game currency for nano, through a swap mechanism.

Its launch came at a time when several game projects known as ‘play-to-earn’ were emerging. Some succeeded and many - built on unsustainable economic models, with their own tokens, in new games, with new communities, created solely to generate profits for greedy investors, not to satisfy gamers themselves - did not.

Kakele Online broke new ground by being a time-tested, free-to-play game. It had an active player base that was already playing for fun and a strong community built on the love of indie MMORPGs. Not only that, it also innovated by deciding to use a universal currency like XNO, instead of creating its own token. This allowed its players to access a decentralised peer-to-peer money which already had its own network, ecosystem and incredibly enthusiastic community.

How does Kakele integrate nano?

There are a few different ways to interact with nano when playing Kakele Online, but the most important thing to understand is: you don't have to use XNO if you don't want to!

It is still possible to enter Kakele's fantasy universe and have fun with friends or alone, improving your character, hunting monsters, completing quests, finding rare items, discovering secret places and even fighting against other players - all without using nano.

Now, if you want to take advantage of other features, there are two main demands that nano meets in-game through direct verification on nano's network, without the need to connect a wallet in Kakele. They are:

Make payments with XNO as well as USD, EUR or BRL

One of the paid features in Kakele (that already existed even before the implementation of nano) is the option to buy 'Kakele Coins', which are exclusive off-chain tokens for in-game use (there is no withdrawal function). With Kakele Coins the player can buy a Premium Account and Boosts within the world of Kakele – such as gold bonus, experience bonus, life bonus, attack bonus, etc.

Since the 4.1 update, you can now buy Kakele Coins with nano, without intermediaries. This avoids the fees inherent to other payment options and improves the experience for players from countries that do not use the support fiat currencies.

To use nano in-game, you need to download and install directly from the kakele.io website, for PC only, because Google Play, the Apple Store and Steam prohibit third-party payments.

Play-to-earn: exchange gold for nano and nano for gold

Players who have a Premium Account can participate in the 'play-to-earn' mode, in an Automated Market Maker (AMM) system with direct swaps between the in-game off-chain currency 'gold' and nano. 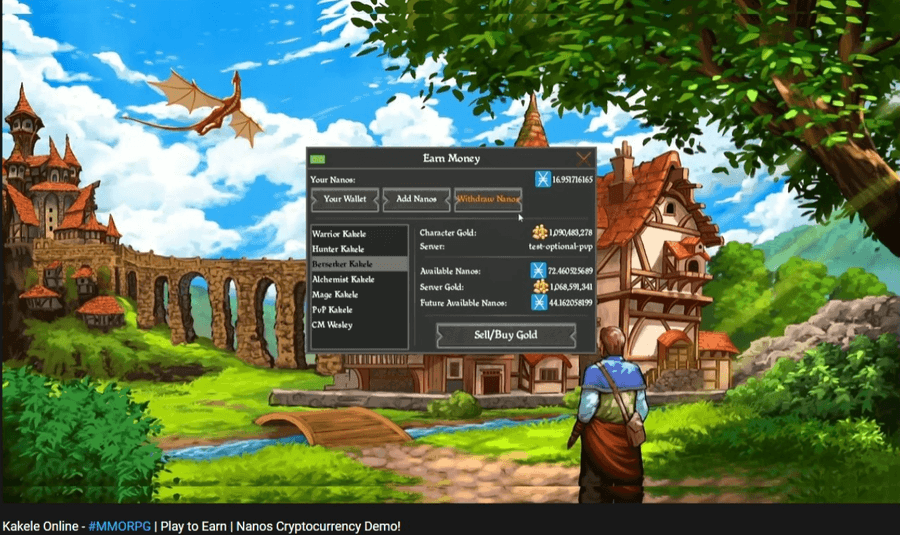 Swaps occur in a liquidity pool within each server, which has an amount of gold and nano; and the price of the pair is calculated by their ratio. So if there are many people depositing gold and withdrawing nano, the value of nano increases in relation to gold; and vice versa.

Players earn gold by killing monsters, selling items to NPCs and completing quests or internal events. Like the Kakele Coin, it is not possible to withdraw gold outside the game environment.

So, now we know how the system works, let’s look in detail at how it has impacted the game itself…

Deep dive: how has the integration performed so far?

Just 15 days after implementing nano, Kakele reached a new record in the number of players online simultaneously: 863. On the 17th of April, 2022, a total of 985 players logged into the MMORPG.

On the 26th of April, the South America Blue server alone reached 403 simultaneous players and on the 3rd of May, all servers surpassed the mark of 1,000 players connected at the same time for the first time. An impressive growth of more than 25% in less than a month after nano adoption.

By October, the ViVa Games team had six collaborators, having doubled in size since the previous version of Kakele Online. And the game was exhibited for the first time at the Brazil Game Show 2022 (BGS 2022), alongside more than 400 other major brands in the segment. BGS is the biggest event in the games sector in Latin America and the last edition had more than 350,000 visitors - an amazing showcase for Kakele and the nano payment solution.

The Kakele team makes recurring monthly XNO deposits to maintain liquidity pools and encourage users to utilise the system. The calculation is complex and performed according to liquidity, usage and number of players and verified payments made on each server. The mechanics are explained in the play-to-earn mode whitepaper.

Deposits are publicly communicated on social media and in the Kakele Online community and at the time of writing, around Ӿ12,840.06 have already been deposited by the team into the GOLD/XNO pool. This amount is equivalent to approximately US $16,539.02, considering the average XNO/USD price on the days of deposits. 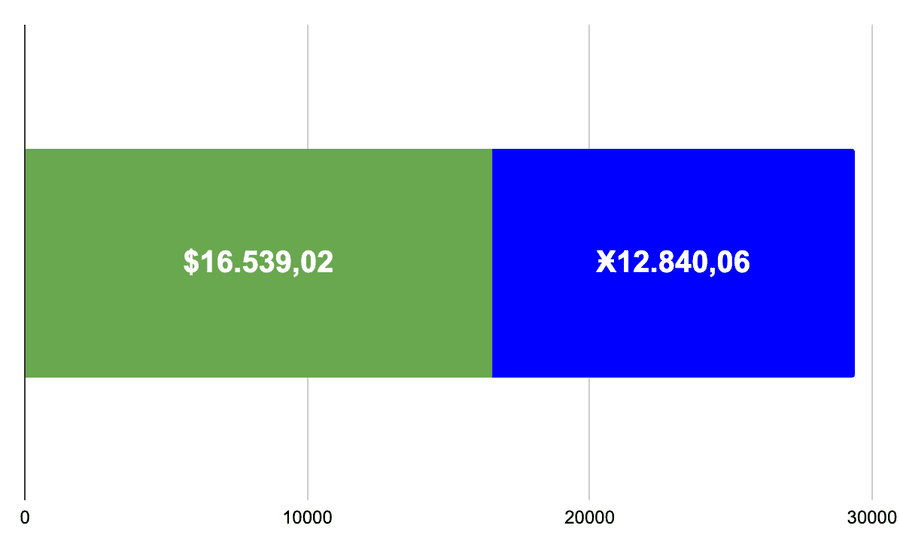 The deposits were as follows, in approximate amounts, considering public communications: 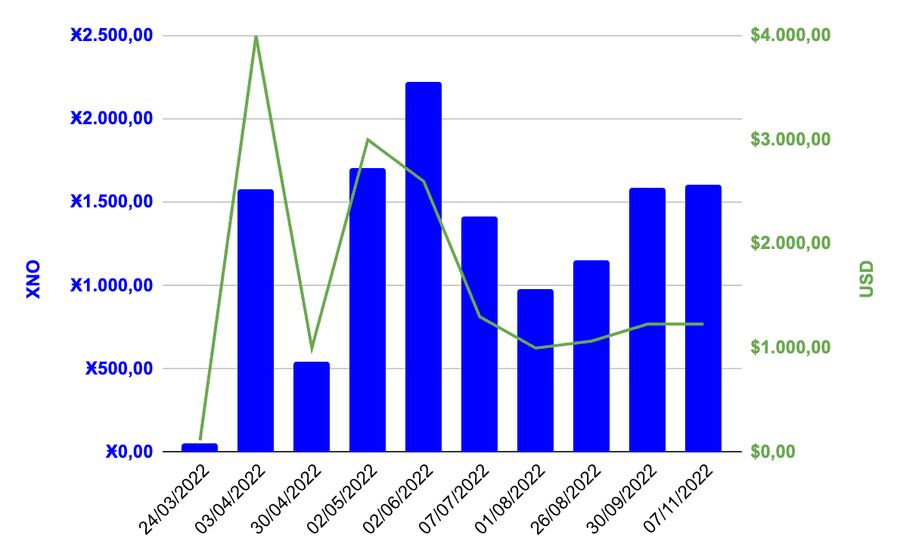 Liquidity and use of nano by Kakele players

The Kakele team informed me, with regard to movement by the players, around 1,000 transactions were carried out, 250 of which were deposits and 750 were withdrawals. Despite the higher ratio of withdrawals, at a ratio of 1:3, players deposited around 6,300 XNO and withdrew around 7,000 XNO, creating a negative net of -Ӿ700, which is offset by the team's recurring deposits. 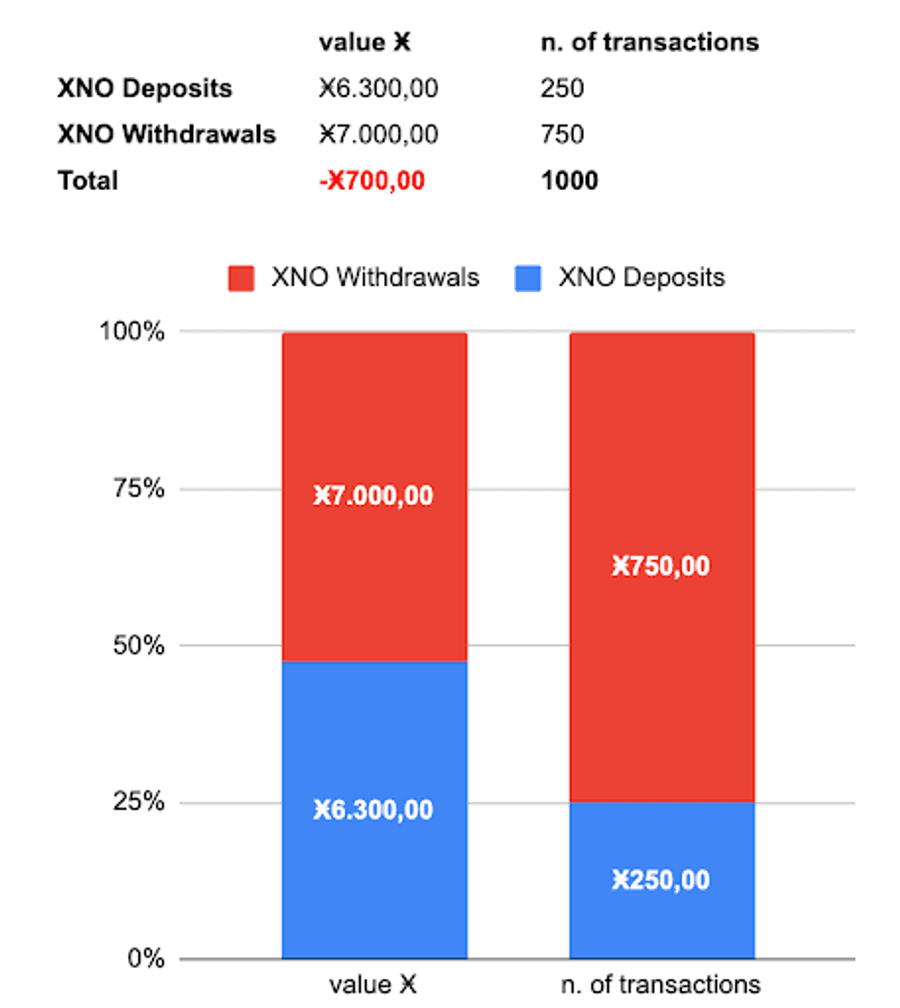 The numbers presented at the end of this article are just approximations, but they provide an idea of the scale of nano’s use within the game, plus the demand and liquidity that this application is already starting to generate for our economy.

The growth numbers are also significant but they should be caveated with the fact that it is not 100% certain that the increase was caused by the adoption of nano.

However, it seems reasonable to speculate that at least part of this growth was due to the adoption of a peer-to-peer payment method, validated directly on a secure, sustainable, feeless decentralised network, normally settled in less than a second and used by anyone, anywhere in the world.

The benefits of using nano as in-game currency

The current net negative on deposits of nano for the swap function with gold may raise some doubts about the advantages of its integration. However, I believe there are extenuating factors related to this.

The balance is fluctuating within its own ‘exchange market’ and there will certainly be times when the pool will have a greater amount of XNO than gold. It is also important to remember that due to the mechanics of the game, gold (internal currency) is inflationary and players receive it for trivial actions within the game. Therefore, it is natural to have a greater demand for swaps for the exchange of this gold to hard, decentralised currency that can be taken and used outside of the Kakele Online universe.

That's why, from a business point of view, the play-to-earn model can be considered as a marketing strategy and a mechanic to attract new players, who are encouraged by the fun of the game, combined with the chance to earn some money whilst enjoying themselves. In this way, deposits, even if in quantitative net negative, can offer numerous qualitative advantages for the game environment as a whole.

These games usually have a very strong ‘network effect’, where an increase in players also means that the game becomes more interesting for those already involved – which in turn incentivises them to become paying players, increasing revenue for the development team through paid functions and premium accounts.

The nano integration with Kakele Online strengthens this effect at its core, as well as accelerating the network effect because it will likely lead to more non-paying users, which can lead to more premium users. This creates a continuous cycle of improvement in the game and the business as a whole. We’ve already observed this growth with records being broken for the number of simultaneous players.

As well as this, by adopting nano for conventional payment solutions for in-game monetisation (purchase of Kakele Coin), the team also saves in fees and removes the delay in confirmation time of financial transactions, as well as gains greater independence for managing their cash flow and balance sheets – which is made more difficult (and expensive) by using intermediary services.

By using nano instead of the USD intermediary service, Kakele could already save over $700. As the game grows and these numbers escalate, the benefits of using XNO for micropayments become even more evident.

Personally, I believe that gaming is a sector in which the characteristics of nano as strong, accessible money really shine: as a medium of value exchange, store of value and unit of accounting. Kakele Online is a perfect example of this being demonstrated in the real world and I can’t wait to see where the development team takes the game in the weeks, months and years to come.

Vini Barbosa is a full-time researcher of the decentralised economy and the Nano Foundation’s Ambassador for Brazil. He plays a level 150+ hunter in Kakele Online. Find him on Twitter, Reddit and Substack.

In the first issue of his new monthly column, Rust developer, Gustav Schauwecker, updates us on the progress of RsNano - a Rust port of the original nano-node.

Join community contributor, Vini Barbosa, as he embarks on an epic quest to take back control of his money.